Islamabad is the most beautiful city in Pakistan, just because of its places.

There are many beautiful and attractive places in the capital city, the beauty and attraction of the places are famous all over the globe not only in the country, tourists from every country visiting to explore the beauty of the state. Here many historical places for a visit along with many natural amazing places and also eye-catching parks and buildings architecture. Have a look at some of the top sights of the city.

The Faisal Mosque is the largest mosque in Pakistan and also in South Asia, which is located in Islamabad. This mosque is the fifth largest mosque in the world. The Faisal mosque has been constructed with attractive white marble, which enhanced the beauty and attraction of the mosque. The mosque was built in the year of 1986, by the late king of Saudi Arabia and it was named after the late King Shah Faisal Bin Abdul Aziz Al Saud.

The National Monument of Pakistan represents four provinces and three territories of the nation, which is located in Islamabad and enhanced the beauty and importance of the state. The Pakistan National Monument was designed by the famous architect Arif Masood. This monument reflects the development and prosperity of Pakistan in the form of flowers. That was one of the most visited places in the state, a tourist from around the globe comes to see the history and culture based museum, the structure f the building is very pretty and attractive.

Rawal Lake is actually a planned natural and artificial lake which planned to store the water of the Rawal Dam, the lake also meets the need for water of both cities. Rawal Lake is situated in the Margalla Hills National Park and Bani Gala. The amazing view and environment people love to visit the Rawal Lake long their families.

Daman-E-Koh is located in the middle of Margalla Hills, It is the top hill garden and most viewing point in the city. Amazing hills and the beautiful greenery of the mountains, and stunning rocky ways are the best way of joy for tourists. If you were visiting Daman-E-Koh naughty monkeys of the hills are a good source of your pleasure there. 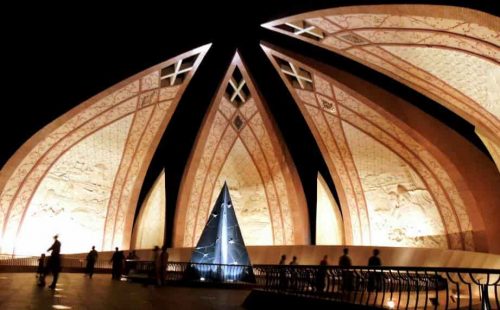 If I say that one of the most beautiful villages in the world is Saidpur village, it’s not wrong to say this. There is no doubt that Saidpur Village is a very attractive place to visit. Saidpur Village is situated near the daman-e-Koh on the Margalla hills. If you want to see the natural aspects of pleasant weather and green mountains along with a pure village cultural environment then Saidpur Village is the best choice for you.

Jinnah Supermarket is one of the most famous and old market places in Islamabad Pakistan, as the city is the most expensive city in Pakistan, so Jinnah Supermarket is fully designed to meet the standard of these people. All kinds of top brands like clothing brands, footwear brands, jewellery, and many others are available here, amazing shops and the market overview are so much attractive.

The weather of Islamabad is divided into five types of weather. Due to pleasant weather and environment, people from other cities come here to settle their lives. Have a look what kind of the weather conditions of Islamabad.

as Winter season (November–February), Spring (March and April), Summer (May and June), Rainy Monsoon (July and August), and Autumn (September and October). In Islamabad, the hottest month is June, the wettest month is July, with heavy rainfall, in the evening thunderstorms with the possibility of cloudburst and flooding. The coolest month is January with snowfall.

A large number of public and private education systems running in Islamabad’s city area. Most of the students of Pakistan came here for higher education. Moreover, High schools and colleges are either affiliated with the Federal Board of Intermediate and Secondary Education or with the UK universities’ education boards, O/A Levels, or IGCSE.

According to the Academy of Educational Planning and Management’s report, in 2009 there were a total of 913 recognized institutions running in Islamabad (31 pre-primary, 2 religious, 367 primary, 162 middle, 250 high, 75 higher secondary and intermediate colleges, and 26-degree colleges). The Capital also has a high training centre for the teacher just to serve a better education. However, here the health care system also is very good and affordable. The largest hospital Pakistan Institute of Medical Science (PIMS) is located in Islamabad. In this hospital, the treatment of any disease is at the lowest price and also free of cost for poor people.

The main religion of Capital people is Islam and its culture is completely according to Islam. Islamabad is situated near the Pothohar Plateau so the people of that area also adopted the tradition of Pothohari.

Islamabad had a vast range of sports and game complexes such as written down.

The Jinnah stadium is used for regular national and international games and events. In 2004, the SAF games were held in this stadium.